BY: ORANGECHAIR
This week’s episode of Doctor Who can be aptly described by its title, “Dinosaurs on an Spaceship.” When an unknown, unresponsive spaceship heads towards Earth in the future, Earth sends out a distress call to the Doctor (Matt Smith). Telling the Doctor that he has six hours to stop the spaceship from crashing into Earth or the ship will be fired upon, the Doctor gathers the troops. Rather than just gathering Amy (Karen Gillan) and Rory (Arthur Darvill), the Doctor brings two new companions to the battle, the African big game hunter Riddell (Rupert Graves) and Queen Nefertiti (Riann Steele). While picking up Amy and Rory, the Doctor accidentally brings Brian Williams (Mark Williams) along with making Rory’s father the second parent to be accidentally transported through time and space on the TARDIS. Landing the TARDIS on the unknown ship, the group finds it uninhabited by anybody that could pilot the ship. The only life forms on the ship are dinosaurs. Upon further investigation the Doctor finds a smaller ship has boarded the large ship. The Doctor has to find out what happened to the inhabitants of the spaceship, figure out how to gain control of the spaceship and defeat the episodes villain, all while dealing with dinosaurs on the spaceship.

Just like the first episode this season, this episode was fairly light hearted throughout almost all of it. With quick witted jokes and quick snappy dialogue, the episode was amusing and intense. One aspect of the show that I really liked was the small Harry Potter reunion. Brian Williams was played by Mark Williams who was Mr. Arthur Weasley in all of Harry Potter films. This episodes villain, Solomon was played by David Bradley who was Argus Filch in the Harry Potter franchise. David Bradley played a great villain, a remorseless psychopath dead set on getting whatever he wants by whatever means necessary. Though he doesn’t react as much as I wanted him to when he is transported in the TARDIS, Mark Williams was a perfect person to cast as Rory’s father. Not only do the two look somewhat alike, or at least enough to make them believable as relatives, Mark Williams even copies some of Rory’s mannerisms and actions.

There were no real hints towards a season long plot save the Doctor distancing himself from Amy and Rory. His visits to Rory and Amy are getting further and further apart. Though he plays it off as if he is just busy, I have a theory as to why the Doctor is not visiting as often. I believe that the Doctor realizes that eventually he is going to have to leave Amy and Rory so he is starting to distance himself to make the moment when the part ways easier. This theory comes from a single look between the Doctor and Amy towards the end of the episode where they are each forced to consider the other’s mortality. It is a beautiful scene that hints at Amy and Rory leaving the show, something we all know is coming.

There was only one aspect of this episode that I didn’t like. Just a few minutes after they get on the spaceship, the Doctor, Rory and Brian get separated from Amy, Riddell and Nefertiti. While investigating the ship without the Doctor, Amy begins to talk and act like the Doctor, explain complicated things that she has no business knowing. The writers try to say that because Amy has been hanging with the Doctor so often that she is picking up some of his knowledge but I couldn’t help but think that Amy should not be explaining these things to me. I did not like the new knowledge that Amy seemed to develop out of nowhere.

Next week we finally get a true Western episode. The writers and creators have had Matt Smith wear his cowboy hat in a number of different episodes and now we get a Western episode. It is called “A Town called Mercy” and will have the Doctor go up against a cyborg who simply calls himself the Gunslinger. As always I will be counting down the minutes until the next episodes and will let you know what I think of it.

Doctor Who Season Premiere!!!!!! The Asylum of the Daleks

Alright, for any of you that don’t already know this, I am a huge nerd and for those of you who don’t believe that, I’m going to prove it to you over the next couple of months for today, September 1st 2012, the newest season of Doctor Who premieres on BBC America. And I plan on writing a post about every single episode.

While I will do my best to avoid any spoilers (has the word ever been more appropriate) from the new episodes, it is going to be difficult to avoid spoilers from any old episodes. This post will have a number of spoilers from seasons five and six because it’s difficult to talk about the new season without referencing the previous ones.

When we last left the Doctor (Matt Smith), Amy Pond (Karen Gillan) and Rory Williams (Arthur Darvill), the Doctor had to face his own death. Forced by the Silence to kill the Doctor, River Song (Alex Kingston) dressed as an astronaut appeared out of a lake to kill the Doctor. In a last minute attempt at defiance, River managed to drain the suits power to save the Doctor’s life. Where in most shows saving someone’s life would be a good thing, saving the Doctor’s life stopped time which basically meant the end of the world. As always, the Doctor ends up saving the universe and surviving the process, even though in this case saving the universe meant the Doctor dying. In another clever Doctor moment he enlisted the help of the Teselecta, a shape changing robot that is controlled from the inside by shrunken, miniature people. The Doctor has the Teselecta change its appearance to look like him and hides inside of it, making it seem as if he was killed only to escape and go into hiding. 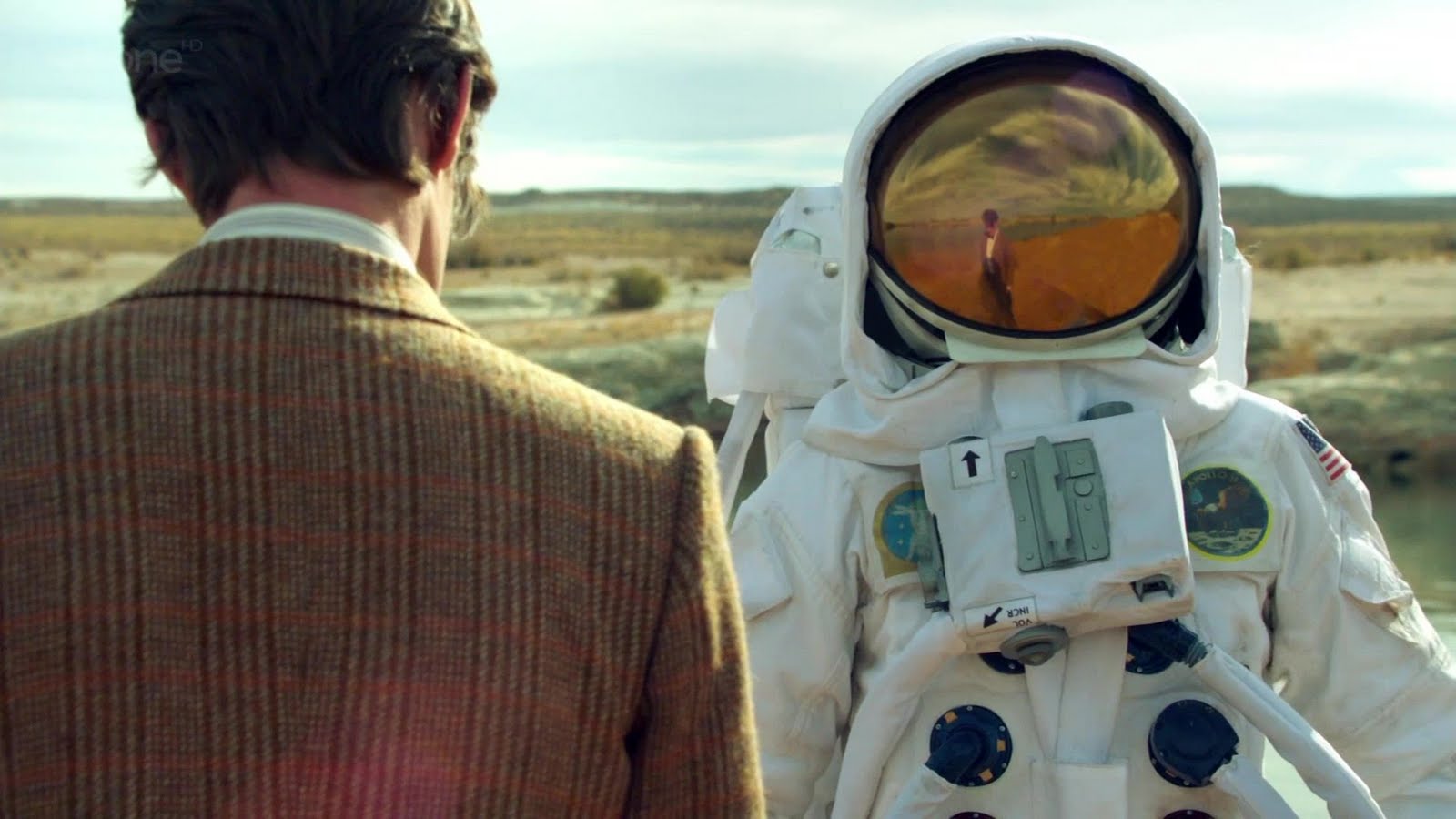 The premiere of Series 7 of Doctor Who begins with the reappearance of the Doctor, replying to a distress call on a world run by Dalek’s. Realizing that the distress call is a trap a few moments to late, the Doctor is “acquired” by the Daleks. Amy and Rory then make their first appearance since last season, giving the audience the sad news that their marriage is on the verge of coming to an end. The story is not long for Earth because the Daleks also quickly and efficiently “acquire” Amy and Rory as well. Amy, Rory and the Doctor have a strained reunion as they meet in a Dalek jail cell seconds before they are thrown into the center of the Dalek Parliament. Surrounded by an overwhelming number of Dalek’s and assuming that he is about the be attacked, the Doctor is shocked when the Dalek’s ask him for help.

There is a planet, a planet known as the Asylum of the Daleks where any Dalek that has gone insane or can no longer be controlled are put. The Asylum is made up of the entire planet and it is surrounded by a force field so that nothing can get out. The problem that the Dalek’s need help with is the destroying the Asylum. Somehow, a spaceship crashed through the force field, leaving a hole in which the insane Dalek’s can escape through and all the Dalek’s in the Parliament are too afraid to go to the planet themselves. The Doctor’s mission, with Rory and Amy of course, is to go to the Asylum and turn off the force field so that the planet can be destroyed. Immediately when arriving on the planet, the Doctor receives a message from a woman named Oswin that has the odd ability to hack into any part of the Asylum. As the Doctor attempts to save Oswin, shut down the force field and save Rory in Amy’s marriage, not necessarily in that order, the trio encounters crazy Dalek’s, a terrifying maze-like asylum, a force field that can turning human’s into Dalek-human hybrids and a terrifying new Dalek weapon that is sure to return later in the season. Though he goes through many trials, the Doctor is given a leg up on the Daleks that will change the way they interact with him forever.

If this episode is any indication of how the rest of the season is going to be, we are in for a great ride. At some point this season, Rory and Amy will be leaving us which I will be alright with. The show has been focusing on them too much and Matt Smith needs his time to shine but more on that in further posts. I am counting down the hours until next week, when we are given episode two, titled “Dinosaurs on a Spaceship.” If you haven’t seen the first episode this season, find a way to watch it so you can stay caught up.