BY: ORANGECHAIR
I was a little nervous when I started watching Annie Hall for one specific reason: the film’s director Woody Allen. I have seen a number of Woody Allen films. Some I loved, like Bullets over Broadway, and some I hated, like Vicky Christina Barcelona, but there was never a middle ground for me. When Woody Allen directs a film I find it to be either brilliant or awful. Luckily for me, I loved Annie Hall, putting it in the brilliant category.

The creator of 500 Day of Summer must have been a fan of Annie Hall because I found the two films to be very similar. Annie Hall is just much less depressing. The film introduces the audience to its dry sense of humor in the opening scene which features main character Alvy Singer (Woody Allen) looking into the camera and actually addressing the audience. The opening speech is about two main things: relationships and the title character Annie Hall (Diane Lane). The film then launches into a non-linear plot outlining the on-again off-again relationship between Alvy and Annie. We see a breakup before the two meet and see them fighting after a long relationship before seeing their first date. 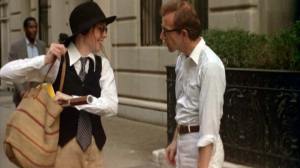 At first I thought it was going to be difficult to explain the plot of this film considering it is told out of order but after thinking about it, the plot is just the story of their relationship. The audience watches, in pieces, as Alvy and Annie meet on the tennis court which results in their first date. As the relationship continues to grow and thrive, Alvy begins to compare it to his two previous marriages, one of which was to a woman named Allison Portchnik (Carol Kane). Alvy quickly realizes how much happier he is with Annie than he ever was with his previous wives. With Annie things are different. Alvy has fun simply boiling lobster with her and just being around her. 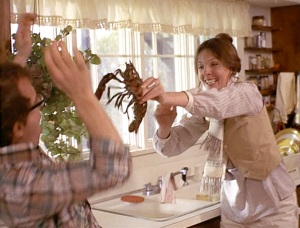 As time goes on, the relationship starts to fall apart, as many do. The film jumps back and forth from a happy relationship to one that is falling apart. Alvy is unable to get along with with most of Annie’s family and becomes increasingly paranoid. As his paranoia grows and he begins to suspect Annie of cheating on him, Alvy and Annie inadvertently push away from one another until they decide they must part ways. The film shows some of the fallout from their relationship, including a couple attempts by Annie and Alvy to get back together. The film goes full circle, following a relationship from beginning to end…just not quite in that order.

The non-linear way of filming is not the only unique technique writer, director and star Woody Allen used during this film. Woody Allen took as many opportunities as possible to break down the fourth wall. He often times has Alvy actually turn to the camera and address the audience. In certain scenes the world seems to bend to Alvy’s will as he asks complete strangers about his crumbling relationship and they answer as if they know everything about his life. In one of the most amusing scenes in the film, Alvy and Annie are waiting in line for a movie and listening to a man misinterpret the work of Marshall McLuhan. When Alvy can’t take it any more, he steps off screen and pulls Marshall McLuhan on screen to correct the error. 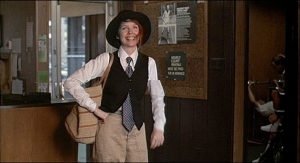 Annie Hall went up against the Goodbye Girl, Julia, Star Wars and the Turning Point for the 1978 Oscar Best Picture. The only other film I have seen of the bunch is Star Wars and honestly, I can’t decide which I would have picked for best picture but I certainly agree that Annie Hall is an Oscar worthy film. The film won more than best picture. Woody Allen took home two Oscars, one for Best Director and one for Best Writing. Diane Keaton also won an Oscar for Best Actress in a Leading Role. A funny and witty film I give Annie Hall a 9 out of 10. Even if you’re like me and Woody Allen is hit or miss, this one is definitely one of his best.