When I get time to write I usually pop out the posts in bunches. The baseball season is rearing towards the end of the season and practices are extremely light and easy as it’s crucial to not get anyone injured as everyone is feeling the aches and pains by now. Regardless I’m here to talk about the NFL and in particular the St. Louis Rams. 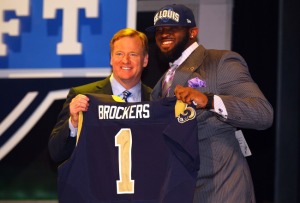 The NFL draft started off with a bang this year. I believe it was ten trades in the first round. The TV ratings were also up from a 4.3 to a 4.8 (read somewhere, but don’t source me on this.) Many of the casual fans may not understand why this is but it’s because of the Collective Bargaining Agreement that took place this off season in creating a rookie wage. Therefore there no longer are guys like JaMarcus Russell that are drafted with a top ten pick that get paid ridiculous amounts of money without having to prove their worth. Once they’ve signed these contracts teams have to pay this money and with salary caps in the NFL teams are basically destined to prosper or fail for the next five years with these players drafted. Now that they have a rookie scale teams are a lot happier and a lot more easy going about trading up to get talent. My team, the St. Louis Rams, is a team that definitely took advantage of this.

The St. Louis Rams are Indianapolis Colts both together were the worst teams in the NFL last season. They tied for the worst records and therefore it was a coin flip who got the first pick (It’s not really a coin flip, but the means does not matter). The rams ended up getting the second pick. The colts went ahead and made everyone aware that they were going to take Andrew Luck. One of the highest rated players coming out of college for a long time. I think since John Elway and Peyton Manning. Andrew Luck is considered pro ready after his play at Stanford. Robert Griffin III won the Heisman and became the next elite quarterback to come out of this years draft. His college play and his combine workouts made him another player coaches with quarterback concerns were drooling over. The Rams sat back and waited for the best offer. The Rams have a young quarterback in Sam Bradford that they are happy with (so am I) and know they just need to get him some weapons and support. The Redskins stepped up and the Rams made the trade and gain the 6th pick in this years draft, 39th pick in this years draft, and first round picks for 2013 and 2014. Thus setting them up to have two first round picks in the next two seasons. The Rams went ahead and used the 39th pick but not before they re traded the 6th pick for the 14th pick and the 45th pick.That 45th pick they traded for they went ahead and traded that for the 50th pick and the 150th pick. If I haven’t lost you yet these are all good moves. The Rams moved back only several of spots, appeared to still get their man, and gained more draft picks.

When all was said and done. The Rams were believed to get Oklahoma State’s wide receiver Justin Blackman but a team traded up and took him with the 5th pick. With their first pick (14th overall) they took LSU’s Michael Brockers. A defensive tackle that only played one full season at LSU. At first I wasn’t sure of this pick. I wanted them to take Claiborne at 6 (which they traded away) or maybe a linebacker here at 14. After I settled down though this was a nice pick. With development Brockers will be a great DT. He already stops the run well and needs to develop his pass rushing ability. With the other lineman the Rams already have they should be set for the next several years if they all continue to improve. A team needs to be built from their line and then out.With the first pick in the second round I wanted them to take a wide receiver. There were plenty of options here and if not I wanted them to take a wide receiver with their second pick of the round and take the linebacker/defensive end Courtney Upshaw from Alabama. From what I heard about him he’s better being a linebacker in a 3-4 style defense. The Rams run a 4-3 defense. He wouldn’t be a good fit then. The Rams picked Brian Quick from Appalachian State. Who? This pick was a reach. They could have taken him probably with their third second round pick or even the first pick in the third round for them. He’s 6-4 220 pounded who runs a 4.55 40 yard dash. He’s a fairly raw talent playing only his senior year in high school and playing at a D2 university. The Rams watched his workouts and fell in love with him. They considered him 1b to Justin Blackman. I’m assuming they took this pick as a steal but I took it as a stretch.

The next pick was 39th overall Janoris Jenkins. Character issues are what dropped this talent out of the first round. As long as he doesn’t end up like Adam ‘Pacman’ Jones this pick is great! Without the character concerns Jenkins is probably a top 15 talent and being argued over who is a better corner back with Morris Claiborne. The Rams knew what they were doing when they traded away the chance at Claiborne. After they traded the 45th pick to the Bears they took Isiah Pead from Cincinnati. A running back that is only a part time back. The Rams need running back depth so this was an acceptable pick but not a home-run pick for being in the second round. Third round pick I’m happy with. The Rams drafted Trumaine Johnson, a corner back out of Montana. If things don’t work out with Jenkins and the Rams have another season full of injuries with their defensive backs they should be able to trust the talent of Trumaine Johnson. He is a second round talent and adds depth to the team. I trust that new coach Jeff Fisher can develop the talent he has picked in the first three rounds. The Rams finally have a coach that has been around the league and has been successful. He has gotten teams to win more games than other teams and he’s done it with less talent. See Vince Young.

By the 4th round it’s really hit or miss on picks and players after this point. Wide receiver Givens was taken in the 4th round. He’s a speed burner that needs to develop. The only problem is that is what most of the other Rams receivers have been and they all have failed or moved on to other teams and succeeded there. The Rams followed with offensive lineman Rokevious Watkins (can never go wrong drafting lineman, could always use more), kicker Greg Zeurlein (cut Brown and saved more than 3 million in cash? I’ll take it), outside linebacker Aaron Brown (best talent pick and happen to be in a spot we need, character issues again. If Rams suck on the field at least they’ll party and win bar fights), and running back Daryl Richardson (he probably won’t even make the team and for a 7th round pick, no sense stressing about this pick).

Overall I think the Rams did a great job in the draft. They had holes in positions and they filled them through the draft. Building teams through the draft is the right way to run an organization. Look at the Packers, Patriots, and even the Giants. They got players that can help their defense right away in Jenkins, Brockers, and possibly Johnson. They added weapons, although specialized, on the offense that hopefully will work out in fisher schemes in Quick, Givens, and Pead as well as adding depth on the line with Watkins. Special teams which normally is horrible for the Rams should even improve with Brown, Richardson (if he makes the team), Pead, and Jenkins. Although I think they reached on some picks I do have trust in Fisher and hope that he can built the Rams back into contenders; and although not replicate the greatest show on turf but make us compare the two different teams.

-I’m getting the momentum going for 200 posts!